Some thoughts on In a House Besieged 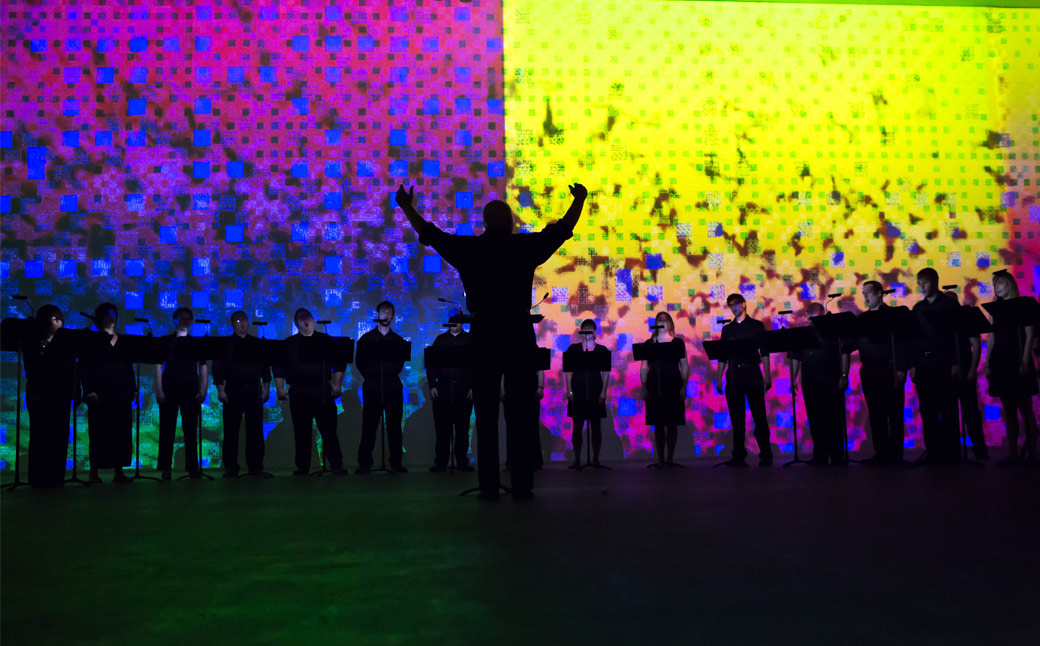 The front page of the morning newspaper features a photo of an elderly woman in Ukraine being helped across a pile of rubble by a middle-aged man.

Perhaps it is her son?
Or someone she doesn’t know?
Or someone related to her that she no longer remembers?
She looks confused.
The photo becomes music in our heads. It is brooding music. Cloudy. Prayerful.

Ever since Rob Maggio’s The Woman Where We are Living, I have wanted to make another piece about aging. The topic is present to me, not just because I am living it, but also because I have seen the hell it can ravage on those we love. So, when Tom Welsh suggested The Cleveland Museum of Art commission a work for The Crossing that honors the life and work of beloved organist and choir director Robert Schneider, and that the new work, appropriately, feature the museum’s rather hidden secret (a fantastic pipe organ in Gartner Auditorium), it occurred to me that this was an opportunity to make such a piece.

The organ: ancient, unwieldy, strong, sacred, historic.
Each organ has so many stories to tell. Its history is collectively formed by those invited to sit at its bench.

A wonderfully strange choice for a secular piece about disintegrating worlds.
And a perfect invitation to make a new piece for our friend and long-time resident organist, Scott Dettra, the original collaborative keyboardist at The Crossing.
And all the more fitting for Penn Live Arts to bring it to St. Mark’s Church on Locust Street, where Scott and I worked together for years, forming what would become The Crossing.

We have wanted to work with composer Stacy Garrop for some time. As friends, we’ve watched her ceaseless energy, meeting the demands of an increasingly full commission calendar with ever-evolving creativity. She often writes (with confident expertise) for choir, and she is the type of composer that will learn an unfamiliar instrument as if she were a virtuoso player. I called her and suggested we make a piece for choir and organ on Lydia Davis’ writings.

Then, I sent her a large pile of brief essays in which one of the great literary voices of our time, Lydia Davis, writes about aging: from the perspective of those who are aging, through metaphor, or as observation.

The world, this morning. The Ukrainian woman, nearly 5000 miles away, in a photo of a newspaper.

And understanding, through observation, tragic stories unfolding while we sleep, becoming allegories over our morning coffee.

Stacy understood my messy pile of suggested texts. From it, she fashioned a libretto that focuses on Lydia’s allegorical use of domestic life. In her stories, houses crumble, roads crack, the floorboards separate, and clay squeezes up between them.

Now we have moved into the upper rooms of the house and stand at the window watching the fish flash through the branches of our peach tree. An eel looks out from below our wheelbarrow.
(A Natural Disaster, Lydia Davis, heard in In a House Besieged)

The centerpiece of Stacy’s In a House Besieged is drawn from Lydia’s work Almost no Memory, a study in aloneness. Stacy’s musical response is an important work, crafted with care and insight, that musically describes an experience familiar to nearly everyone in this time of increasing elderliness. Changes that are frightening in the oncoming blizzard of dementia, of decaying memories.

she likes to lie and watch the darkness come down into the woods,
though tonight, as sometimes before, she does not really watch,
or though her eyes rest on the darkening woods,
she is not so much watching as waiting, and often, now, feels she is waiting.
(Almost no Memory, Lydia Davis, heard in In a House Besieged)

Memory, experience, and ritual tie our program together.
Memory plays a leading role in Lansing McLoskey’s The Memory of Rain, as it does in the poem on which it is based, in which Philip Levine considers (unapprovingly) the knowledge carried by clouds, as they look down on a warring, decaying world…and do nothing.

​The clouds go on eating oil, cigars,
Housewives, sighing letters,
The breath of lies. In their great silent pockets
They carry off all our dead.
(Clouds, Philip Levine, heard in The Memory of Rain)

Lansing’s compositional vocabulary is perfectly suited to Philip’s words; he creates worlds of uncertainty, of anger and expectation, of the need for decision-making. It is the music of Democracy, of shifting scenarios and of a desire for something better that lies just out of our reach. His harmonic impulses are unresolved; they hold tension; they embrace and then obscure understanding; they touch our memories, but in unstable ways.
Are things as they seem?
Though written over ten years ago (for The Month of Moderns 2010 and to also feature Scott Dettra), The Memory of Rain is uncannily matched to Stacy’s In a House Besieged.
They are works of memory.
And they meet The Crossing’s mission to create a record of our time:
We were here; this is what it felt like to be here.

The woman in the photo is under a gray cover of clouds.
The sun is not hers today. Even if available, she cannot look up.
She does not have that luxury.
Her steps become metaphor.

When I programmed this concert, I did not realize that the work closing Act I, a work from Estonia, would have any more meaning than the words of its prayer. It was primarily chosen to fill out the concert with a revered Baltic composer familiar with choirs and organs. Yet, the woman in the photo is a neighbor to Estonians; her fear could soon be theirs. They are connected through geography and history. This is the beauty and the misfortune of timing and programming; the way in which the resonance of any given work can change overnight by the appearance of a photo in a newspaper.

And so, the climax to Arvo Pärt’s Salve regina, carries new meaning.

A cry for help in an otherwise placid prayer setting.

Perspective.
Eyes.
The words that silently form in our minds in response to what we’ve seen,
by what clouds see.
Memory. Decay. Hope. Supplication.
Words that become prayers.
In a world of evolving meanings.

The houses are angry because they’re watched.
A soldier wants to talk with God
But his mouth fills with lost tags.

The clouds have seen it all, in the dark
They pass over the graves of the forgotten
And they don’t cry or whisper.