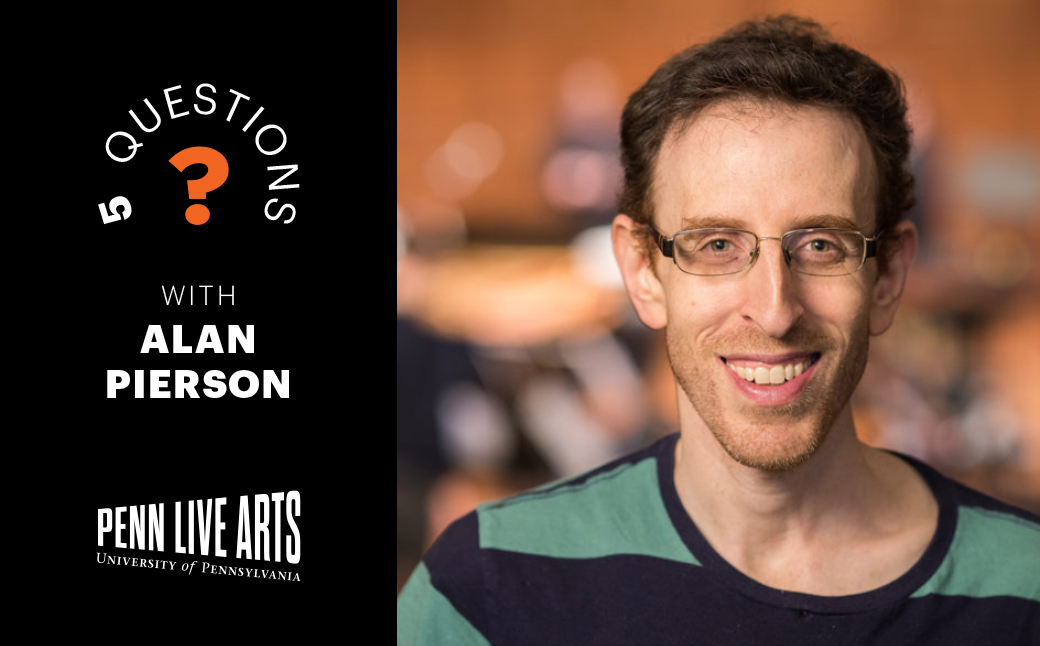 We are so excited to open our 21/22 season with Alarm Will Sound on September 25. Hailed as “the future of classical music” by The New York Times, the acclaimed new music ensemble makes its first return to Philadelphia in 12 years to perform John Luther Adams’ site-specific work Ten Thousand Birds at the Morris Arboretum. In our eager anticipation, we connected with Alan Pierson, Artistic Director and conductor of Alarm Will Sound, to learn more about his life as an artist and the ensemble’s recent activities in just five questions. Enjoy!

1. Tell us about your role as artistic director of Alarm Will Sound.

Alarm Will Sound is a collaborative organization. The members of the group are chosen not just for their excellence as players, but also for what they bring in their musical thinking and in all sorts of ways in which individuals enrich and give life to an organization. We started as a collective and continue to function as one, so I see my role as Artistic Director as being to harness the power, energy and creativity of the ensemble. I aim to give everyone space to bring what they want to bring to the group, but also guide the decision-making. I’m a firm believer of the idea that with an ensemble of people who are this talented and creative and the more they are inspired to bring this to the organization, the more the organization will thrive.

2. What projects are you working on currently?

Now that we’re back to doing work in-person again, we’ve been delving into the opera that David T. Little is creating for us on Garth Greenwell’s book, What Belongs to You. Garth is my best friend for upwards of 20 years. We went to Eastman together where Garth was a singer, and I was a composer and conductor. I was Garth’s accompanist, or “chamber partner” as we used to call it, so we’ve been making music together for a really long time. Garth then became an author and now David is creating this opera on his work. We just had a workshop in Columbia, MO at our summer festival where we played the first two acts. It’s going to be a brilliant opera and I’m very excited about it.

Alarm Will Sound is also working on a follow-up to our Acoustica project. Acoustica was the album that really put Alarm Will Sound on the map as our first true calling card. There’s been a tremendous amount happening in the world of electronic music since Acoustica, so we’ve been thinking about where electronic music has gone since then. That has been motivating a new project we’re working on now.

In 2018, after the very tragic loss of our horn player, Matt Marks, we started a project in his memory called the Matt Marks Impact Fund, which is about giving seed money to develop new, groundbreaking, risk-taking projects by adventurous artists. We’re going to work on a number of projects that the Impact Fund has sponsored, including an opera by Damon Davis named Ligeia Mare, after the moon of Saturn, which connects afro-futurism and the life of Sun-Ra. Ted Hearne is doing orchestrations for it, which is really exciting.

3. Name a few artists or composers you love that everyone should check out.

In the last week, I’ve been listening to one of my favorite albums, Dawn of Midi’s Dysnomia. They created something so unique with that album. Dysnomia has a sound unlike anything I’ve ever heard. It uses muted piano, dampened drum colors and bass harmonics, which merge into these incredibly intricate, beguiling, African-inspired rhythmic patterns that turn in all sorts of unexpected ways. They don’t sound like a piano, bass and drums trio at all. It’s a remarkable album that I listen to again and again.

Another artist to check out is Bec Plexus, who just put out her first album last year. She’s so creative and the different kinds of music-making she draws together in that album are so brilliant and done so organically. The result was just magical, and people should definitely check it out.

I can’t not mention Taylor Mac, who has been a total inspiration for me and also how I met my partner. We met at Taylor's 24-hour event in New York in 2016, so Taylor has a very dear place in my heart. Alarm Will Sound has actually had a few Taylor collaborations in the works over the past few years, but they've kept not happening for one reason or another. Hopefully we'll get to do something with him sometime soon.

4. When live performances were put on hold during the pandemic, how did you keep busy/active? Did you develop any new interests or hobbies?

Alarm Will Sound actually did a ton of work during the pandemic. It took us a little while to get going because we’re a large ensemble spread out across the country. And it was a little hard for us at first to figure out how to keep working together without the possibility of travel or being in the same space as each other. But we had our internet connections, our home gear and all our creativity; so, we got to work on putting together home set-ups that would allow us to make music together remotely. That led to a series of projects called Video Chat Variations. We’ve done four of them now, and there are a few more still yet to come. These are works that we commissioned for the video chat medium. The medium challenged us to find ways to make music over the internet in real time together, which has been very stimulating. I'm an artist who tends to be drawn to (and sometimes gets obsessed with) rhythmically intricate music, and this new medium forced me to challenge certain ideas I had about what makes music and music-making interesting. Alarm Will Sound also recorded a bunch of albums during the pandemic, developing practices that let us work independently on recording. It's become an incredibly fruitful and creative period for us.

Personally, I also discovered that I really enjoy time at home, which is something I didn’t have a lot of before the pandemic due to my touring schedule. I ended up collaborating with my partner on a very cool art project we did with Alarm Will Sound called Ten Thousand Birds/Ten Thousand Screens, which we put out as a video on YouTube. It is a made-at-home reworking of Ten Thousand Birds, which John Luther Adams wrote for Alarm Will Sound.

5. How did you first get into conducting?

I was an undergraduate physics student at MIT, and I had learned about the music of Steve Reich in a composition class I took in the summer between high school and college. Something inspired me to go check out the score for Reich’s Tehillim in the MIT music library and I just sat there on the floor of the library staring at it in wonder. I spent hours and hours with that score, totally fascinated, losing all track of time. I wanted to be part of making that music happen, which kind of got me started conducting. I had already conducted some of my own music and my friends’ music, but it was Tehillim that really made me feel like I needed to conduct. So, during my sophomore year at MIT, I put together a group of friends and conducted a terrible, terrible performance of Tehillim. But the music itself compelled me to try to get better at conducting, and that’s really the way my entire career as a conductor has gone. I’m inspired by the music that I love and want to make happen, so I try my best to rise to the occasion of it.