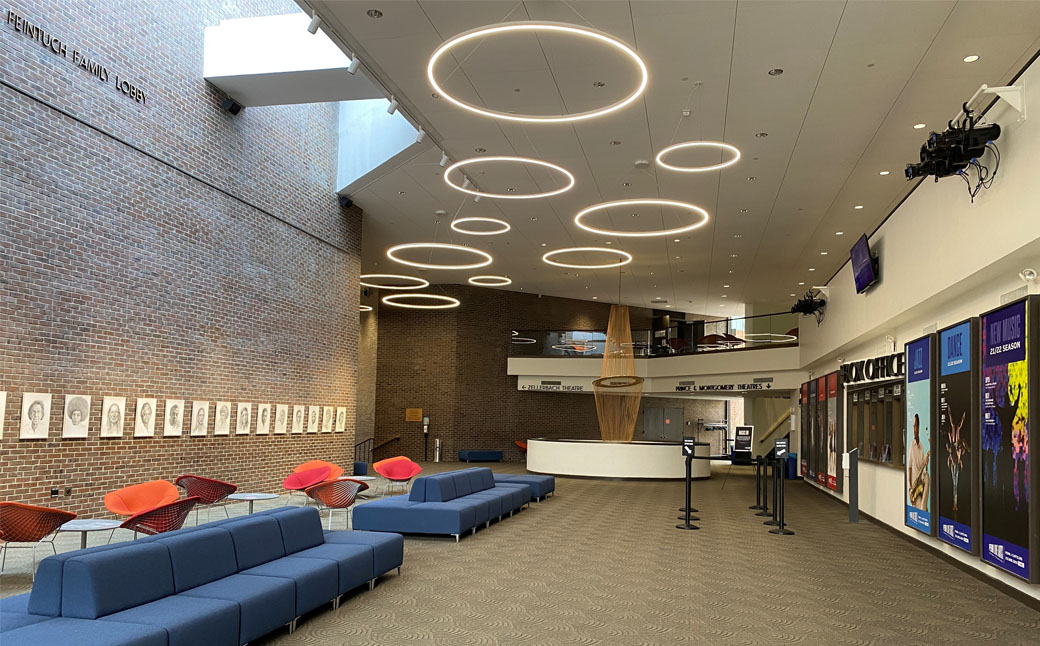 Over the past two years, we’ve been very fortunate to embark on numerous projects to renovate and upgrade the Annenberg Center’s facilities and infrastructure. These major improvements, designed by VSBA Architects, were made possible by a gift from Keith L. and Katherine Sachs, which formed the Sachs Program for Arts Innovation in 2016.

Rounding out the exterior building upgrades are three new digital signs on Walnut Street, at the 37th Street entrance and outside the main plaza entrance. These state-of-the-art signs feature rotating content promoting upcoming performances, partner organization events and announcements, and are controlled by a remote content management system. The days of opening the glass poster case doors and manually switching out six posters in the two Walnut Street cases are officially over!

Inside the building, the Feintuch Family Lobby has been completely transformed. A sea of ring-shaped pendant lighting fixtures that range from four to eight feet in diameter brighten and enliven the space. The rings echo the Bertoia sculpture and the circular well that passes through the lobby floor. At the far end of the lobby, a section of the masonry parapet on the upper mezzanine level has been cut away and replaced with a glass railing. The glass rail opens what was a dark corner and allows more natural light from the Walnut Street windows into the room. It also provides a better view of a new mural by artist Isaac Tin Wei Lin entitled Primary Prism. The work, co-commissioned with the Sachs Program, has been painted over three floors of the Walnut Street staircase.

Beyond the larger architectural gestures in the room, many other elements have been added or improved upon. New furniture, including Bertoia wire chairs and sectional sofa seating, has been arranged throughout the lobby spaces and upper mezzanine. An art hanging rail has been mounted on the brick skylight wall with new track lighting, allowing for rotating exhibitions in the space. Lighting rails installed on the upper mezzanine parapet hold state-of-the-art color-mixing LED ellipsoidal spotlights for lobby events. The lobby sound system has been completely overhauled, with new 70v line array speakers and wireless microphones, and all sound and lighting are controllable by a single tablet. Additionally, there are portable staging units that can create a lobby performance space within minutes, a portable projector and even a movie screen.

Arriving later this spring will be new concessions carts that feature built-in handwash sinks, refrigeration and storage. These carts, paired with a fit-out commissary kitchen, will eventually be able to support the service of brewed coffee along with our normal concessions offerings.

Inside the venues, these improvements have made digital cinema possible. With new projection screens, projectors (including a 4K resolution, 30,000 lumen model), audio and lighting, our film screening capabilities have been taken to the next level.

There are also countless infrastructure upgrades that are unlikely to be noticed but will make day-to-day operations infinitely smoother. These include the re-zoning of our existing lobby lighting to allow for better intensity control between floors, the addition of new outlets, circuits and network ports inside and out, and a new tie-in for a power distributor for larger plaza events.

A second project, funded by a gift from the Zellerbach Foundation has upgraded the lighting and control within the Zellerbach Theatre. The main fixture lighting the space since the early 2000’s was the Altman Shakespeare, the standard of that time. With this gift, we were able to upgrade to the latest industry standard with ellipsoidal reflector spotlights. In addition to the replacement of all of our conventional theatrical fixtures, we were also able to replace our 1970’s Strong Super Trooper follow spotlights and upgrade our lighting control console to a state-of-the-art ETC GIO 24K control console. This console will allow us to continue to use our conventional theatrical dimmers and fixtures, but also support the future of theatrical lighting with LED units and intelligent lighting.

As you can tell, it’s been a busy time behind the scenes as we improve and upgrade inside the building and out. Be sure to look for some of these exciting changes when you’re next at the Annenberg Center.