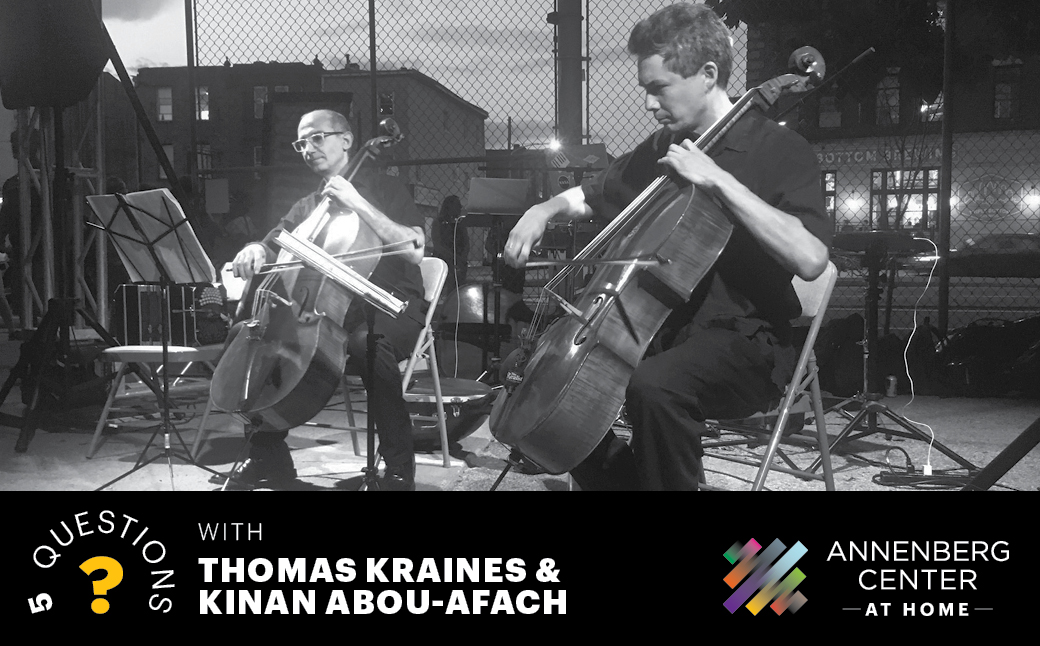 Cellist Thomas Kraines and cellist/oudist Kinan Abou-afach are joining forces on our stage on March 4. Kraines has graced our stage numerous times with the Daedalus Quartet, Penn’s quartet-in-residence. Abou-afach, whose musical output champions Arabic and Syrian traditions, was supposed to perform for us alongside the Daedalus Quartet back in April 2020 but that show was cancelled due to the pandemic. We are so excited these excellent musicians will share our stage soon, but first, let’s learn more about this duo in a special 5 Questions double feature.

1. What is your earliest memory of hearing music?

We had a double-record of Arthur Fiedler and the Boston Pops playing children’s classics: one side was The Nutcracker, one was Peter and the Wolf, one was Britten’s The Young Person’s Guide to the Orchestra, and one was The Carnival of the Animals. We would always listen to Peter and the Wolf, but once I wanted to try out The Carnival of the Animals. I remember my father telling me I wouldn’t like it because “it’s just music.” It wasn’t as it had the Ogden Nash poems also, but I listened to that record incessantly. I started studying cello a few years after that and was surprised to hear that the cello plays The Swan, my favorite piece at the time.

2. How would you describe the music that you typically create?

I’m most interested in music that comes out of collaboration. It might originate from one person or another but develops immeasurably when others get involved. When I’m writing a piece to perform with Kinan, I’m imagining him playing it, trying to hear the sounds that he’d bring. Often, with a group that I really trust, the score on the first day of rehearsal is a template, which might get altered in many ways over the course of rehearsal. And for some groups, of course, there’s no score at all, no preconceived notion of what we’re going to play; sometimes no conversation, just listen and play.

3. What is your process/how do you compose music?

For a while, in order to write music, I felt as though I needed to have a certain problem to solve. My pieces were getting very conceptual and process-oriented. I like to think these pieces still work as music, but I had lost the feeling of freedom and spontaneity that writing music used to provide, partially because I had found those feelings more in free improvisation. I thought writing notes on paper required a sturdier intellectual framework than just improvising. A couple years ago, after writing a piece in which the pitches were based on the sequences of digits in ratios of adjacent numbers in the Fibonacci sequence, I decided maybe it was time to just write what sounds good, and perhaps discover the intellectual framework after the piece is done.

4. Who are your biggest influences?

I’m trying to reach a point where absolutely everything I hear is an influence – car horns, the sounds of running water, conversation, footsteps and recorded and live music. My current belief is that music becomes music in the listening process, as much as or more than in the creative process. Jorge Louis Borges wrote, “I sometimes think that good readers are poets as singular, and as awesome, as great authors themselves.” I feel the same way about good listeners, whose ranks I’m hoping to join. Having said that, I listened to a lot of Beethoven, Pink Floyd, Duke Ellington, Ravel, King Crimson and Tom Waits in my formative years, so one could probably find the influence of those artists in my music.

5. What role does the musician have in today’s world?

I think that music, particularly improvised music, has the potential to bring people together like almost nothing else. Paul Hindemith apparently said that “people who make music together cannot be enemies, at least while the music lasts.” That may or may not be true, but creating music together requires a degree of patience, of listening, of selflessness that is so often missing in the social world. Of course, it’s possible to improvise music egotistically, to tune out the other voices and just do your own thing, just as one voice can dominate a conversation. But when there’s a shared aesthetic goal (which can be as simple as “let’s just play something that sounds cool”), the music can always find a way through. I’ve thought for a while that if every political deliberation or diplomatic negotiation started with a group free improvisation, the path to peace might be easier to find.

I sing much more often than I shower. It stands to reason that I’d do both simultaneously, at least some of the time.

1. What is your earliest memory of hearing music?

Growing up in a city like Damascus, “hearing” music was a daily event. From chants at neighbors’ celebrations, to the daily radio scheduled song by Umm Kulthuum, or from street vendors chanting hardly intelligible phrases to sell the “best tomatoes ever.” Even the licorice drink vendor held two metal bowls to play an infinite percussive loop announcing the fresh brewed licorice.

But, memories of "listening” to music were different. I remember our house being full of vinyl records, and I still vividly remember (visually and sonically) a Louis Armstrong record and recording of the Dvorak cello concerto, played by Rostropovich.

2. Talk about your background.

I was born and raised in Syria. I studied both classical Arabic music and the western classical music. It is joyful to know these two music traditions: the heterophonic nature of Arab music versus the structured and more organized western music.

3. What is your process for composing music?

I always like to begin with a pencil and paper. Although it usually looks like scribbles and random ideas, this procedure always feels inspiring in a way. After the ideas are penciled in, the digital work begins. The ideas come in a very unpredictable fashion. Sometimes from a pattern of noise from an everyday event, sometimes from pre-determined sit-and-think sessions (almost like Stanislavski’s method of acting/emotional memory). There are no specific rituals, but in general, I do enjoy some chaos around me combined with burning frankincense.

4. What projects are you working on currently?

I am finishing up a SATB choir piece based on the poetry of the Sufi poet and thinker Ibn Arabi. Written centuries ago, his words still resonate today (and are so needed): "I believe in the religion of love, wherever its paths go, as love is my faith and belief."

5. What role does the musician have in today’s world?

I used to be an “art for art” kind of musician. But then (no need to politicize this movement or its critiques), I began having an urge to let our creations/performances/appearances have a purpose, a goal a message. Regardless of the message’s content (injustice, love or simply enjoying a day at the beach, etc), I consider musicians and artists in general to be “stimulus to life” like Nietzsche said, and we are the lucky ones for being able to do that.

Never! My singing is offensive and insulting to the laws of physics and sound. If it is packaged correctly, it could be used as a human deterrent.