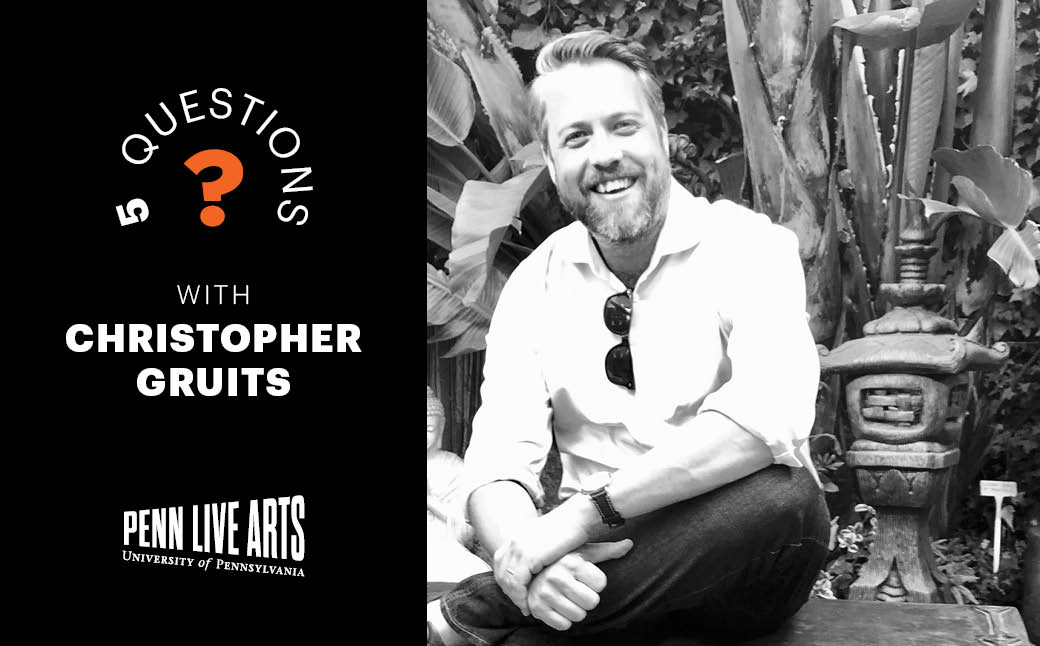 Our 5 Questions series takes us behind the scenes with artists and other personalities in the Penn Live Arts space. You may already know our Executive & Artistic Director Christopher Gruits, who appears onstage in person or virtually before shows, welcoming you and giving some insights into what you'll be seeing. Now, we turn the lens around and share about what Chris is thinking as we begin our 50th anniversary celebration. Plus, learn about some intriguing aspects of his life that you might not have guessed.

1. What does the new identity, Penn Live Arts, signify, both now and for the future?
Penn Live Arts really reflects where we are at this point in time. It honors our roots as a Penn institution, connecting us more closely to the University community. At the same time, it symbolizes our increasingly expanded programming outside the walls of the Annenberg Center. And, at its most basic, it reflects our commitment to live performance.

2. During the pandemic, Penn Live Arts was one of only a few Philadelphia arts organizations to stream live performances. Why was this important?
It was crucial for us to maintain our mission of providing live artistic experiences to our audiences and to Penn students. We wanted people to have that opportunity to witness ephemeral moments that only come with live performance. It was also really important to support artists and invite them to join us in this new medium. In many cases, they were inspired to create innovative new works. I'm proud to say that there were five world premiere performances among the 27 live digital streams we produced. And we will continue to do livestreaming as part of our season offerings.

3. You are beginning a multi-season celebration of the Annenberg Center's 50th anniversary. What were the most important highlights of those 50 years? Can you give us a hint of any artists we might see in the celebratory 22/23 season?
It's thrilling to be celebrating 50 years of the performing arts at Penn and also in Philadelphia, because Annenberg was the first performing arts center in the city. From the very beginning, the Annenberg Center had an early commitment to new theatre, artists of color and to storytelling from a wide range of artists across disciplines. Legendary theatrical producer Hal Prince staged many premieres here before his shows went on to Broadway and received national attention. This led to relationships with producing theatres around the world, such as Yale Repertory Theatre, the Guthrie Theater, Abbey Theatre and more. Important artists were introduced here such as playwright August Wilson and contemporary composers Steve Reich and Philip Glass. One of the jewels in our crown is our modern dance presentations. The series, then Dance Celebration, was founded at Penn in partnership with Randy Swartz and is now one of the largest modern dance presenters in the U.S. Our Philadelphia Children's Festival also goes back to the early days, showcasing our long commitment to presenting high quality performances for youth. I think the great range of programs and the sheer quantity and importance of the artists presented at the Annenberg Center speak for themselves.

As far as our 22/23 season goes, I can tell you that it will be a big season, including artists not seen before in Philadelphia and addressing many important issues of our time. Stay tuned!

4. What has been your greatest accomplishment at Penn Live Arts so far?
Without question, I think the greatest accomplishment has been sustaining live performing arts and supporting artists through the pandemic. As we work on returning the organization to a healthy state, I am grateful for the many dedicated staff and supporters that helped keep us stable and functioning. I'm also proud of maintaining and expanding our commitment to artists of color and investing in new work that would not otherwise be seen in Philadelphia.

5. Who inspires you?
I am inspired by risk-takers, by people who are genuine collaborators, and by those who are original in whatever they undertake.

Bonus Question: What's one thing about you that audiences might be surprised to learn?
That I am a history and architectural history nerd. My favorite period of American architecture would be the early 1900s Arts and Crafts and Art Nouveau movements. I also have a big interest in colonial history and living in Philadelphia has offered no shortage of amazing sites to visit.

Bonus Question: If you could meet one great musician or dancer, who would it be and what would you talk about?
Italian composer Claudio Monteverdi, one of the most pivotal composers in Western history. His music is so moving and extraordinarily innovative for its time. It's really incredible music and I would love to understand where he got his ideas from and to learn about his inspirations, process and beliefs.