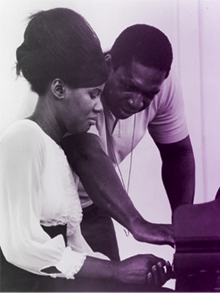 Alice and John Coltrane are jazz royalty. Our Coltrane Festival explores the immense impact this duo had on American music, with an exciting emphasis on Alice’s significant and often underrepresented contributions. With rising star saxophonist Lakecia Benjamin serving as Artistic Advisor, we showcase John’s bebop, free jazz and spiritual enlightenments alongside the more abstract sounds and Eastern influences of Alice’s compositions. World premieres, Penn Live Arts commissions and an impressive line-up of artists bring the timeless music of the Coltranes into the present day.

A prolific star of the dance world, choreographer Pam Tanowitz’ company performs our world premiere commissioned work set to Alice’s music and played live by Lakecia Benjamin and her band, Pursuance. Benjamin remains in the spotlight in an all-Coltrane inspired program featuring a Penn Live Arts commissioned piece and some very special guests. Ravi Coltrane brings a personal connection in a grand exploration of his parents’ musical legacy, and jazz harpist Brandee Younger continues her years-long dedication to Alice’s music, highlighting her earlier works. Films and discussions with Coltrane scholars round out our thematic journey with these jazz icons. I am very pleased to be included in the celebration of Alice and John Coltrane during the festival. My quartet will perform many of the songs on my album as well as a selection from John Coltrane's Blue World album. In addition, we will perform John Coltrane's music live for Pam Tanowitz Dance's performance. I love performing with dancers and this is a very special opportunity for me."


The Coltrane Festival is supported in part by The Sylvia and Randle Kauders Foundation.