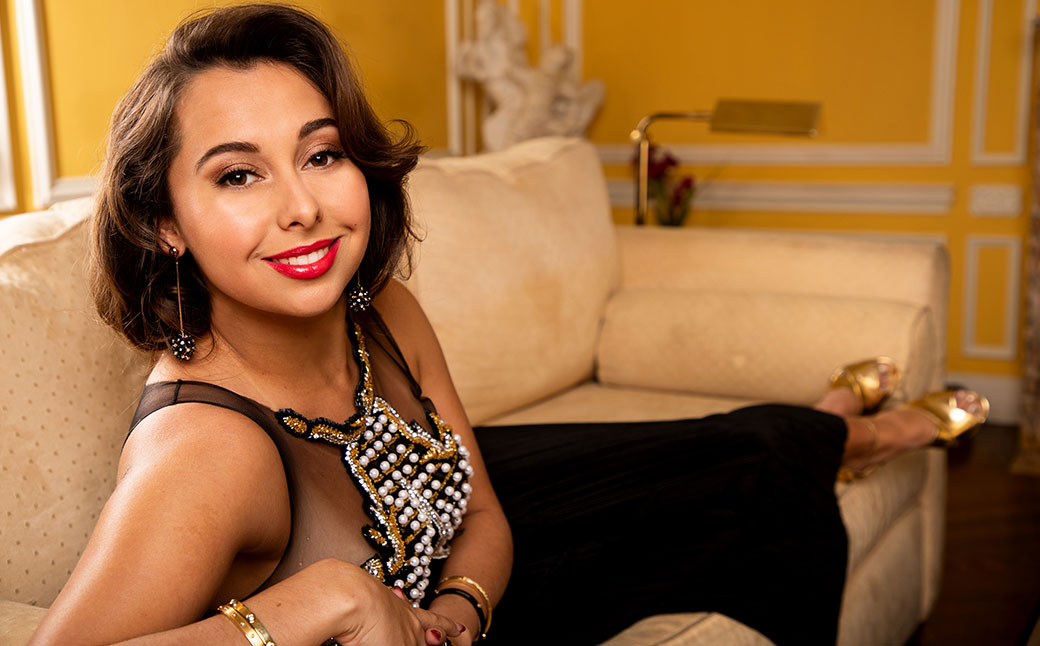 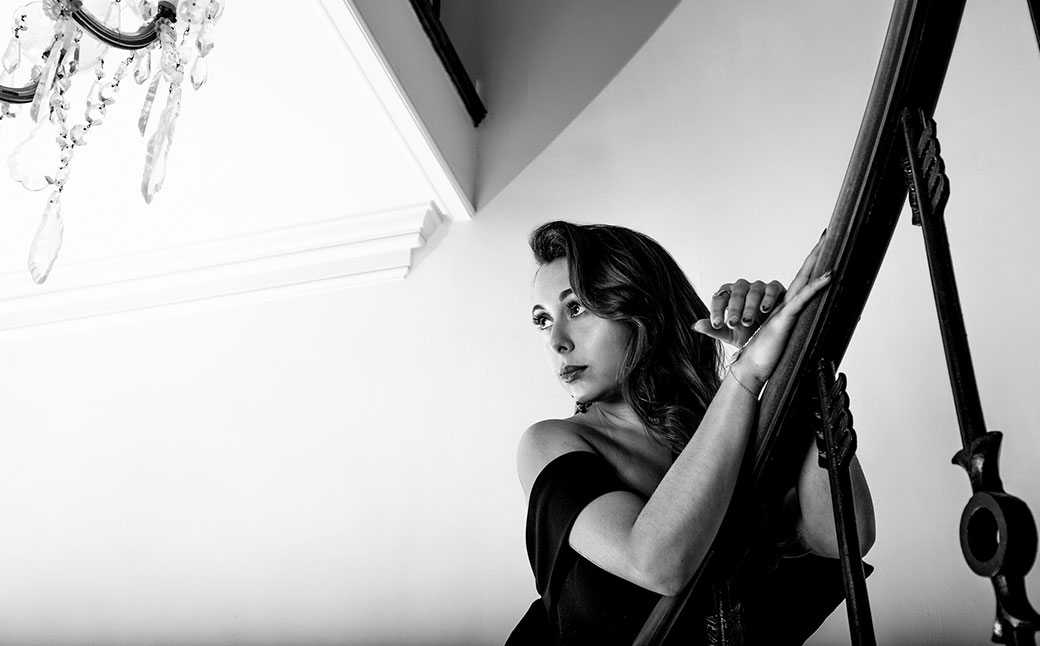 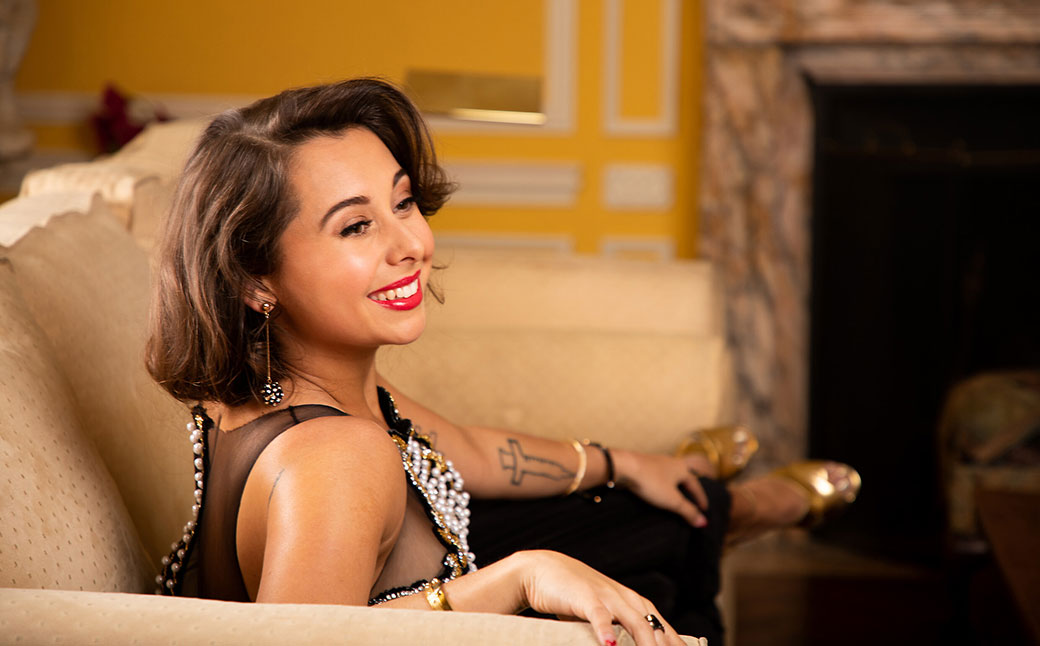 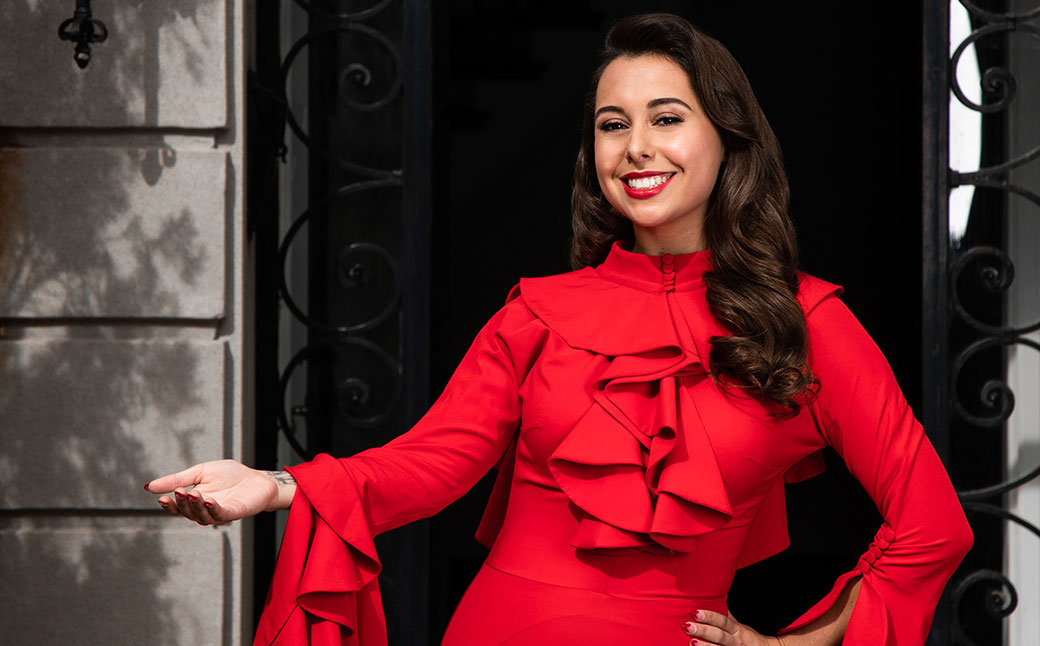 A recent finalist at the prestigious Thelonious Monk Jazz Competition, vocalist Veronica Swift makes her Annenberg Center debut backed by Philadelphia-based pianist Tim Brey. This rising jazz star is already known for vocals that are "soulfully infused with an infectious passion for jazz past and future.” (All About Jazz) With expansive musical influences, a commanding stage presence and a renowned jazz lineage, Swift is carving out her own identity in the world of jazz and beyond, and she’s just getting started.

“Her startling command and improbably mature delivery have made her a cause célèbre among fans of traditional jazz, and landed her on stages with some of the music’s finest improvisers.” -The New York Times

Veronica Swift Bio
Veronica Swift (Vocalist)
At age 26, Veronica Swift has become one of the world's most sought-after jazz talents. Having grown up on the road with her parents (jazz pianist Hod O'Brien and jazz vocalist Stephanie Nakasian), Swift was exposed to some of the greatest musicians of the time including Annie Ross, Jon Hendricks, Bob Dorough, Paquito D'Rivera and Marilyn Maye. At age nine, Swift recorded her first album, Veronica's House of Jazz, and began professionally touring with her parents as well as singing and playing trumpet in the Young Razzcals Jazz Project, with whom she would perform for the next 10 years. It was with the Young Razzcals that she had her first opportunity to perform on festival stages like the Telluride Jazz Festival. At age 11, after recording her second album It's Great to be Alive, Swift headlined her first show at Dizzy's Club Coca-Cola in New York City. She continued touring through college, obtaining her bachelor's degree from the University of Miami in 2016. Just before graduating and the passing of her father, Swift was awarded second place at the 2015 Thelonious Monk Jazz Vocal Competition, landing her a showcase at the esteemed Birdland Jazz Club in New York City. In 2017, she moved to New York to pursue her growing career. Maintaining a weekly residency at Birdland, she continued to tour internationally, notably joining the line-up for acclaimed trumpeter Chris Botti. Swift has also toured and performed on numerous occasions with Michael Feinstein, Benny Green and Wynton Marsalis and the Jazz at Lincoln Center Orchestra, and appeared at legendary festivals (Festival International de Jazz de Montréal, Monterey Jazz Festival, Umbria Jazz Festival, Detroit Jazz Festival, Jazz in Marciac) and jazz clubs (Birdland, Dizzy's Club, Jazz Showcase, Jazz Standard, SFJAZZ, Jazz at Lincoln Center Shanghai, Blue Note Jazz Club). In 2018, Swift signed a deal with Mack Avenue Recordings and shortly thereafter, released her 2019 album, Confessions. Considered her “proper debut” album, Confessions features alternating accompaniment from Benny Good and Emmet Cohen, two of the finest jazz pianists of their respective generations. Swift will release her next album this spring. In addition to singing bebop and Great American Songbook classics, Swift is a passionate devotee of the 20's and 30's repertoire, opera, rock and metal. She also writes and acts in films that she creates with Darkstone Entertainment.

Tim Brey Bio
Tim Brey (Pianist)
Pianist, composer and educator Tim Brey is an in-demand jazz artist living in Philadelphia who holds a BM in jazz studies from Temple University, where he studied under pianist Bruce Barth. He has had the privilege of performing in small groups led by Terell Stafford, Veronica Swift, Dick Oatts, Rodney Whitaker, Steve Wilson, Eric Alexander, Noah Preminger, Joanna Pascale, James Moore and John Swana. He has also been featured in ensembles with Branford Marsalis, Dee Dee Bridgewater, Wycliffe Gordon, Houston Person, Karrin Allyson and many more. Brey’s extensive knowledge of the Great American Songbook and bebop tradition, as well as his forays into jazz fusion, hip-hop, R&B and house music, have led him to a diverse career as a solo pianist/keyboardist, bandleader and sideman in Philadelphia and beyond. His eclectic performances evidence his commitment to keeping jazz fresh and relevant in a constantly evolving, modern musical climate. Brey has performed and studied internationally at the Keep an Eye Jazz Award competition at the Conservatorium van Amsterdam, and with saxophonist Raymond McMorrin in Urayasu and Fukishima, Japan. Leading his own piano trio, he has opened for the Philly POPS at the Kimmel Center in Philadelphia and at the grand opening of the new Cape May Convention Hall in New Jersey. In June 2015, Brey was a fellow at Ravinia’s Steans Music Institute. While attending the prestigious, invite-only workshop, he studied composition and improvisation under the direction of jazz legends Billy Childs, Nathan Davis and Rufus Reid. In addition to a busy performance schedule, Brey also has a passion for education. Having taught privately for over 10 years, Brey was hired in the fall of 2014 by the Boyer College of Music at Temple University and in the fall of 2016 at the University of the Arts as an instructor of jazz piano, music theory and improvisation. When the world reopens, Brey can be found every Sunday running the “Midtown Jazz Jam with Tim Brey Trio” at Time Restaurant and Whiskey Bar in downtown Philadelphia.