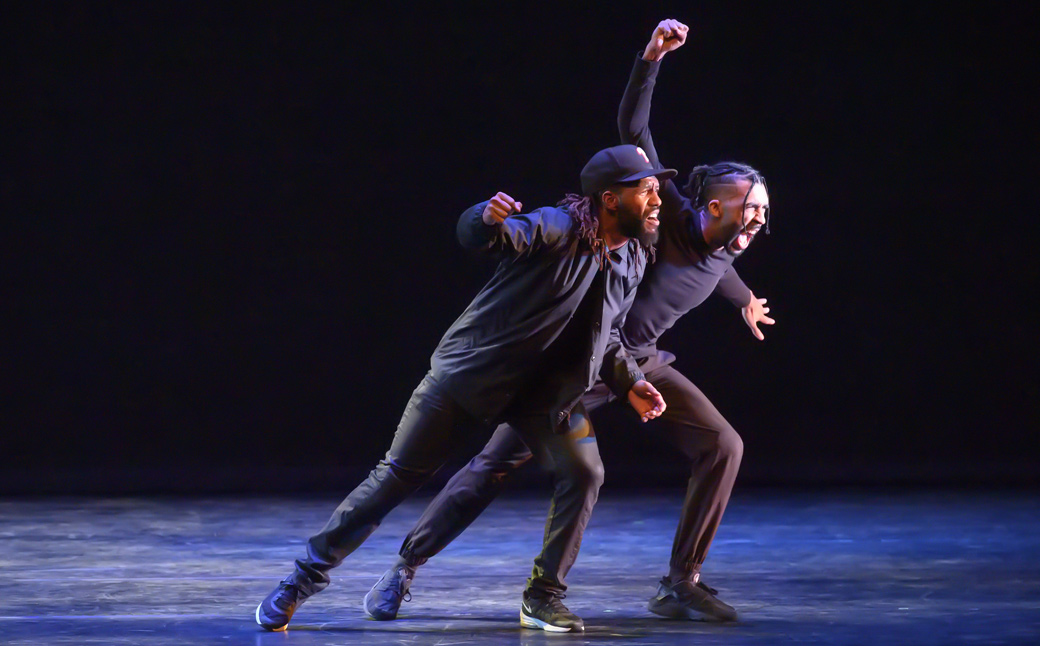 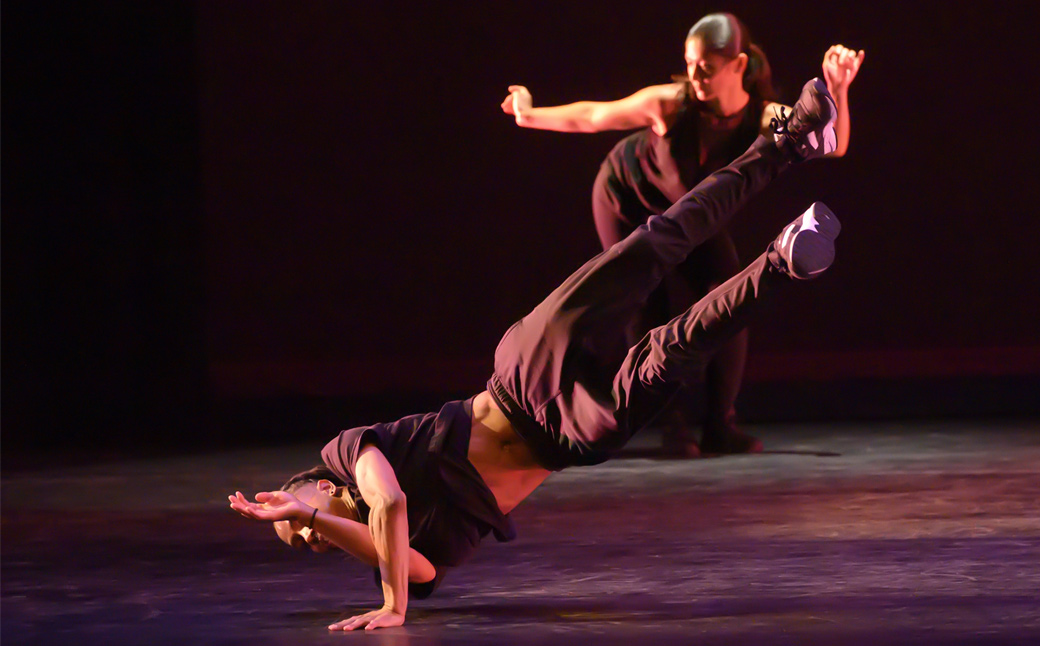 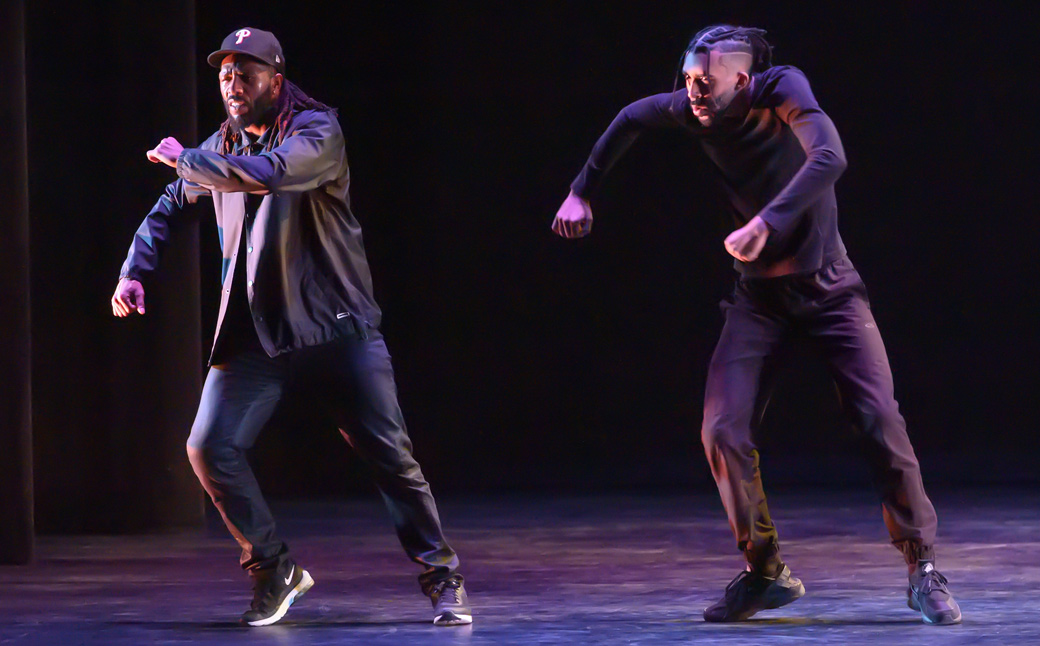 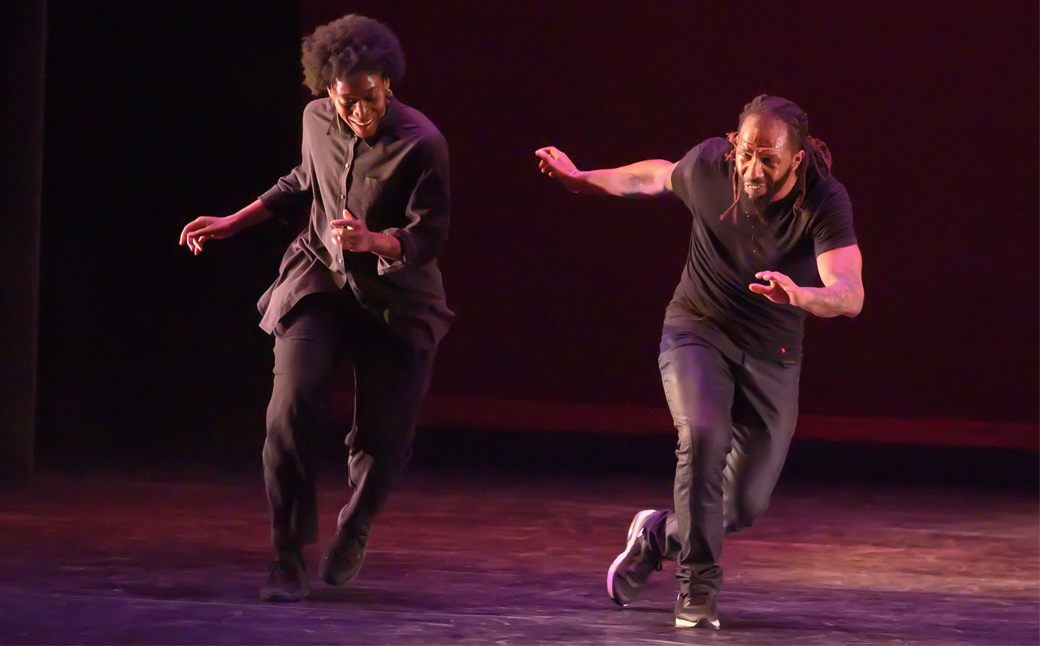 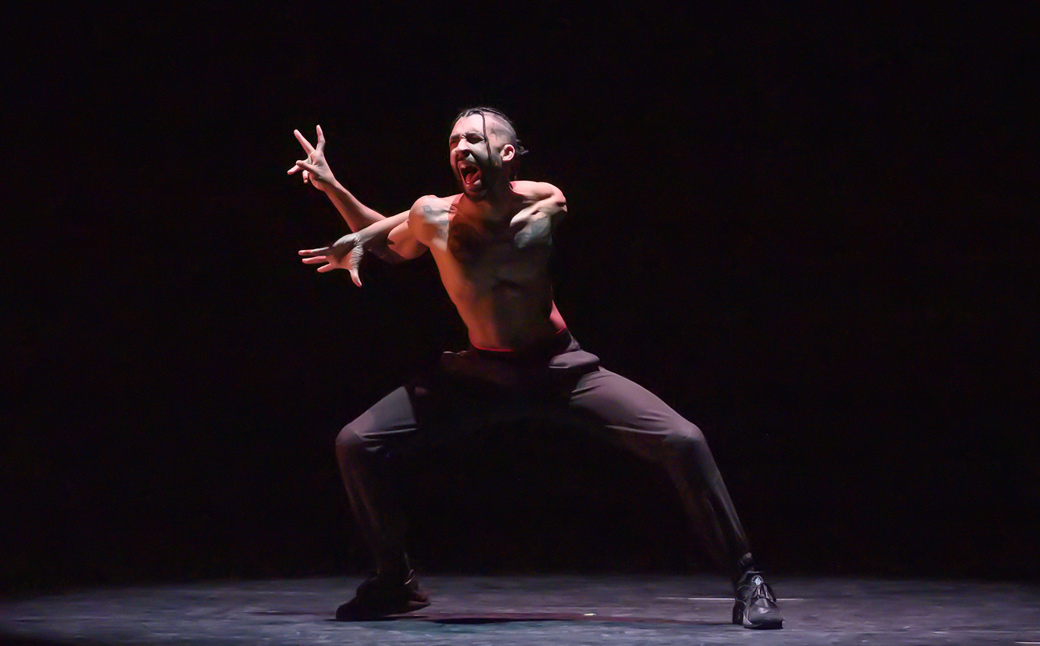 Rennie Harris, “the most brilliant hip-hop choreographer in America,” (The New Yorker) returns with an evening of works including two that directly reflect on current tragedies facing our nation. A reworking of the acclaimed 1995 duet, A Day in the Life, tells the story of brothers who get caught up in a violent street altercation with the police, while Black Promises, set to music by Beyoncé, is a tormented solo about systemic police brutality against black men. It’s hip-hop storytelling at its finest by “the most profound choreographer of his idiom.” (The New York Times)

This is an original, live event performed on our stage and streamed online. The Q&A will be led by Deborah A. Thomas, R. Jean Brownlee Professor of Anthropology and Director of the Center for Experimental Ethnography at Penn. Visit our FAQs page for additional details.

Rennie Harris Puremovement
Rennie Harris Puremovement (RHPM)
In 1983, Rennie Harris began the next phase of his career by touring with some of the most seminal rap artists in the world. Unaware he landed a contract for the first official rap tour in American history, The Fresh Festival, he opened for rap legends and pioneers Run-DMC and Jam Master Jay, The Fat Boys, Kurtis Blow, UTFO, Newcleus and LL Cool J to name a few. Later, he would open and perform with artists such as Afrika Bambaataa & the Soulsonic Force, Dougie Fress, Grandmaster Flash and the Furious Five, Kool Moe Dee and the Treacherous Three, Salt-N-Pepa, Roxanne Shanté, Madonna, Kathy Sledge, Gloria Gaynor, Harry Belafonte, Will Smith, Zakir Hussain and more. By 1987/88, Harris made his way home to Philadelphia, where he jumped right back into the spotlight by dancing and choreographing for local artists. Within just a few years, Harris was fully integrated into the Philadelphia street dance scene. Harris, now 27 years old, was just beginning to feel grounded again in his hometown when he received a phone call from a Michael Pedritti, director of a premier theatre in Philadelphia called Movement Theater International. Pedretti had been watching Harris for a while and thought he would be perfect for his festival. He was aware of Harris’ childhood popping crew, The Scanner Boys, and wanted him to choregraph 45 minutes of work. Harris hit the clubs of Philadelphia to search for dancers for his new project. When it was all said and done, Harris recruited his founding members: Abdule Iote, Steffan Walker, Clyde Evans Jr., James Colter, Anisa Morgan, Chaquita A. Anderson, Joni Helton and Kim Wilson. He created works including Endangered Species and Students of the Asphalt Jungle that later propelled his career. With a successful premiere in 1992, Harris founded Rennie Harris Puremovement (RHPM). Performed by The Scanner Boys, the last piece of that night was Puremovement, hence the company’s name.

As a leading street dance theatre company in the U.S., RHPM is dedicated to preserving and disseminating hip hop aesthetics and street dance culture through workshops, classes, lecture demonstrations, residencies, mentoring programs and public performances. With his roots in the inner-city, Harris presents a unique story, one that is riveting, intimate and honest. He says it was hip hop that taught him honesty, humility and purity. RHPM’s mission is to reeducate the masses about hip hop culture and street dance through its artistic work. Harris’ work embodies the diverse and rich African-diasporic traditions of the past, while simultaneously evolving a new voice through dance. Harris is committed to showing audiences a sincere view of the essence and spirit of street dance rather than the commercially exploited stereotype portrayed by the media.

The company’s most well-known, evening-length work is Rome & Jewels (1999), which was choreographed, written and directed by Harris in collaboration with dramaturg Ozzie Jones, d. Sabela Grimes, Rodney Mason, Raphael Xavier, composer/sound designer Darin Ross and lighting designer Pamela Hobson. Originally, Rome & Jewels used Shakespeare’s text and colloquial language. During the workshopping process, the lead cast of dancers (Ozzie Jones, Raphael Xavier, Rodney Mason and d. Sabela Grimes) improvised their own poetry and writings into the script, earning them the title of co-authors. Rome & Jewels is the longest touring hip hop dance theatre work in American history with three Bessie Awards, four Black Theater Alvin Ailey Awards, the Herb Alpert Award in the Arts and a nomination for a Laurence Olivier Award (U.K.). Rome & Jewels has performed to sold-out audiences both nationally and internationally. It also became a highly successful outreach tool for the company. Fusing classical text with slang and mixing hip hop music with rock, modern and classical sounds, the work touched many cultures and communities. In addition to Rome & Jewels, Harris has a catalog of works that span more than 30 years with evening-length works such as: Falling Crumbs From the Cake (1990); Legends of Hip Hop (1998); Facing Mekka (2003); Something To Do With Love (2006); 100NAKEDLOCKS (2009); HEAVEN (2011 ); Luv: American Style (2015); Nuttin But A Word (2016); Rennie Harris Funkedafied (2017); Rennie Harris LIFTED (2017); and Caravan: A Revolution On The Road (2018) in collaboration with trumpeter Terence Blanchard. His latest evening-length work, Lazarus (2018), was set on Alvin Ailey American Dance Theater, marking the first time he has set an evening work on a company other than his own.

RHPM and its infectious brand of movement has toured the globe including France, Switzerland, South Africa, West Africa, Brazil, Mexico, Canada, Scotland, Japan, China, Kazakhstan, Congo, Italy, Germany, Netherlands, Australia, New Zealand, Columbia, Finland and Monaco. Harris’ company has performed for the Queen of England and the Princess of Monaco. It served as Ambassadors for the United States of America as part of President Obama’s cultural exchange program and Dance Motion USA. Currently, RHPM is remounting Rome & Jewels and will introduce the American classic to new audiences worldwide. Look out for its cross-country tour in 2022 which starts in Philadelphia and then heads to New York, Maine, Vermont and Boston before making its way west. In addition, Harris will premiere two new works, American Street Dancer and Losing My Religion. Marking Harris’ return to the stage, Losing My Religion will feature his tour-de-force solo, Endangered Species.

Rennie Harris Bio
Rennie Harris (Founder)
Lorenzo “Rennie” Harris is a leading ambassador for hip hop. Harris grew up entrenched in hip hop culture and was immersed in all its forms - music, dance, language. Throughout his career, he has embraced the culture and sought to honor its legacy. He believes hip hop and street dance are the purest forms of movement in that they honor both the African and African American-Latino heritages. His life has been devoted to bringing hip hop and street dance to all people. Harris’ artistic philosophy reflects a deeper understanding of people that extends beyond racial, religious and economic boundaries. He believes that hip hop, because of its cross-racial and transnational popularity, can help bridge these divisions. Harris’ work encompasses the diverse and rich traditions of the past, while simultaneously presenting the voice of a new generation through its ever-evolving interpretations of dance.

Harris is well versed in the vernacular of what he calls hip hop “proper” as well as the various techniques of B-boy (often mistakenly called breakdancing), house, GQ and other styles that have emerged from the urban, inner cities of America such as the North Philadelphia community in which he was raised. Noted for coining the term “street dance theater,” Harris has brought social dances to the concert stage, creating a cohesive dance style that finds a cogent voice in the theatre. He is a powerful spokesperson for the significance of street origins in any dance style. Intrigued by the universality of hip hop, he seeks inspiration from other forms and performance art. Harris has developed works that challenge audience expectations about hip hop and street dance. His work has explored his personal experiences as an African American male growing up in North Philadelphia. Harris returns here to the ideas of “Puremovement” and seeks to challenge those who see hip hop and street dance as purely male forms of expression.

Harris is also the founder of the annual street festival, Illadelph Legends which he started in 1997/98. Every year since, guest artists and students have come from around the world to Philadelphia for a weekend of classes, lecture demonstrations, panel discussions, jam sessions and performances. The guest artists and teachers are seminal performers in the field of hip hop and street dance. The original teachers included the creator of Campbell Locking, Don “Campbell Lock” Campbell, the creator of Fresno Boogaloo & Popping, Boogaloo Sam, his group the Electric Boogaloos, and B-boy pioneers Crazy Legs of the infamous Rock Steady Crew and Lil Lep of New York City Breakers, just to name a few.

To date, Harris has been awarded three Bessie Awards, fours Alvin Ailey Black Choreographers Awards for Rome & Jewels, an Ethnic Dance Award and the Herb Alpert Award in the Arts for choreography. He has also been nominated for a Laurence Olivier Award (U.K.) for Rome & Jewels and nominated again for best choreography in 2006 for Love Stories (Alvin Ailey Dance Theater). He has received a Guggenheim Fellowship, a PEW Fellowship and a USA Artist of the Year Fellowship, as well as the coveted “Philadelphia Rocky” Award and Governor’s Artist of the Year. He was also voted a Creative Ambassador of Philadelphia. At the turn of the century, Harris, alongside Princess Grace Kelly and Julius “Dr. J” Erving, was voted one of the most influential people in the last 100 years of Philadelphia history and has been compared to 20th century legends such as Jean-Michel Basquiat, Alvin Ailey and Bob Fosse. He received an honorary doctorate from Bates College (Lewiston, Maine) in 2010 and another from Columbia College (Chicago, IL) in 2012. The first street dance choreographer to set a 60-minute work on Alvin Ailey American Dance Theater, Harris received Dance Magazine’s Legend Award, Palm Desert Festival’s Lifetime Achievement Award and, most recently, the Doris Duke Artist Award.