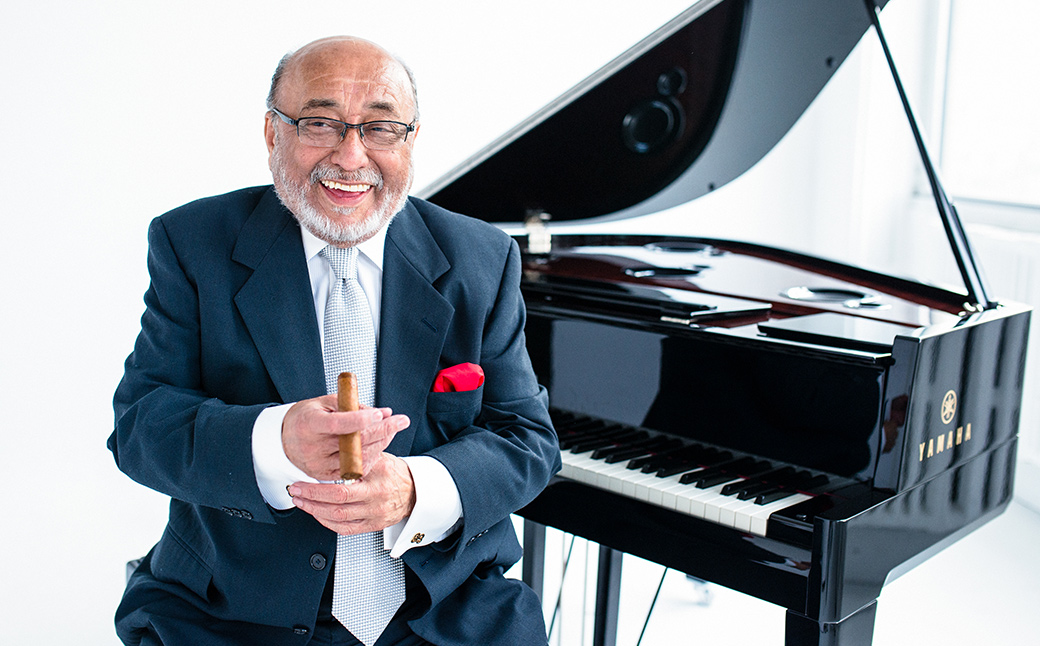 Legendary pianist, bandleader and NEA Jazz Master Eddie Palmieri is at the top of his game. This beloved patriarch of Latin jazz has amassed nine Grammy® Awards while remaining on the cutting edge of Afro-Caribbean music since the early 1960s. Known for his bold charisma and innovative drive, Palmieri returns to our stage, fusing his Puerto Rican heritage with the complexity of jazz influences as one of the great pianists of his era.

Eddie Palmieri Bio
Eddie Palmieri (Leader/Piano)
Known as one of the finest pianists of the past 60 years, Eddie Palmieri is a bandleader, arranger and composer of salsa and Latin jazz. His playing skillfully fuses the rhythm of his Puerto Rican heritage with the complexity of his jazz influences including Thelonious Monk, Herbie Hancock, McCoy Tyner and his older brother, Charlie Palmieri.

Palmieri’s parents emigrated from Ponce, Puerto Rico to New York City in 1926. Born in Spanish Harlem and raised in the Bronx, Palmieri learned to play the piano at an early age and at 13, he joined his uncle’s orchestra playing timbales. His professional career as a pianist took off with various bands in the early 1950s including Eddie Forrester, Johnny Segui and the popular Tito Rodríguez Orchestra. In 1961, Palmieri formed his own band, La Perfecta, which featured an unconventional front line of trombones rather than the trumpets customary in Latin orchestras. This created an innovative sound that mixed American jazz into Afro-Caribbean rhythms, surprising critics and fans alike. Palmieri disbanded La Perfecta in 1968 to pursue different musical endeavors, though he would return to the band’s music in the 2000s.

Palmieri perfected his arranging skills in the 1970s, releasing several impressive recordings that reflected his unorthodox approach to music. His unconventional style would once again surprise critics and fans with the 1970 release entitled Harlem River Drive. This recording was the first to merge what were categorized as “Black” and “Latin” music into a free-form sound that encompassed elements of salsa, funk, soul and jazz. In 1975, Palmieri won the first-ever Grammy® for Best Latin Recording for The Sun of Latin Musivc. He has won nine Grammys altogether to date including two for his influential recording with Tito Puente, Obra Maestra/Masterpiece.

Recognizing him as an American icon, the Smithsonian’s National Museum of American History in Washington, D.C. recorded two of Palmieri’s performances for its archives in 1988. Because of Palmieri’s proclivity for creating music in a funk Latin style, Little Louie Vega invited him to record on Nuyorican Soul (1997), a release that became very popular in the house and underground music scenes.

In addition to the Grammy® Awards, Palmieri has received numerous honors: Eubie Blake Award (1991); Most Exciting Latin Performance, presented by the BBC in London (2002); Yale University’s Chubb Fellowship, usually reserved for international heads of state but given to Palmieri in recognition of his work building communities through music (2002); Harlem Renaissance Award (2005); Jay McShann Lifetime Achievement Award (2008); and induction into the Oklahoma Jazz Hall of Fame (2008). A year later, the Library of Congress added Palmieri’s widely popular eight-and-a-half-minute composition “Azúcar Pa’ Ti” to the National Recording Registry, which at the time only included 300 compositions documenting the history of all recorded music in the U.S. With “Azucar Pa’ Ti,” Palmieri changed the format of the recording industry, breaking the three-and-a-half-minute barrier imposed by the industry.

In 2012, celebrating 75 years, Palmieri continued to innovate with new music that was included in the original score for a documentary co-directed by Bobbito Garcia called Doin’ It In The Park: Pick-Up Basketball, NYC. The film explores the cultural influence of playground basketball on sports and music. Palmieri’s music for the documentary was released as a soundtrack in November 2013. This was his first time recording his own new music since winning back-to-back Grammy® Awards in 2005 and 2006. The songs featured in the documentary are part of his full-length 2017 album, Sabiduría, a fusion of jazz, funk and Latin fused with Afro-world rhythms.

In 2015, he released a new big band version of his classic composition “Vámonos Pal Monte,” along with the first-ever studio recording of another popular original, “Pa La Ocha Tambo.” Through 2015 and 2016, Palmieri recorded a big band album entitled Mi Luz Mayor which featured Carlos Santana and Gilberto Santa Rosa. In fall 2016, he recorded seven classic songs for an interactive audio app released in 2018. He released his album Sabiduría/Wisdom in the spring of 2017.

Palmieri celebrated his 81st Birthday on December 15, 2017 after concluding a year-long tour entitled EP @ 80. Since 2017, all of Eddie Palmieri’s new music has been released in successive volumes.

Luques Curtis Bio
Luques Curtis (Bass)
Luques Curtis was born in 1983 in Hartford, CT. After receiving formal training on the piano and percussion, he found himself wanting to play the bass. Curtis studied at the Greater Hartford Academy of Performing Arts, the Hartford-based Artists Collective and the local Puerto Rican cultural center, Guakia, with Dave Santoro, Volkan Orhon, Nat Reeves, Paul Brown and others. While attending high school, he was also fortunate to study the Afro-Caribbean genre with bass greats Andy González and Joe Santiago. Through his talent and hard work, Curtis earned a full scholarship to the prestigious Berklee College of Music in Boston where he studied with John Lockwood and Ron Mahdi. While in Boston, he had the opportunity to work with musicians such as Gary Burton, Ralph Peterson, Donald Harrison, Christian Scott and Francisco Mela.

Now living in the New York area, Curtis has been performing worldwide with Eddie Palmieri, Stefon Harris, Ralph Peterson, Christian Scott, Sean Jones, Orrin Evans and Christian Sands. In 2016, he was the Rising Star Bassist on DownBeat’s Critics Poll and also received the Ralph Bunche Fellowship to complete his master’s degree at the Mason Gross School of the Arts. He co-owns a record label called Truth Revolution Records with his brother, Zaccai, with whom he also has five releases as the Curtis Brothers including the most recent, Algorithm. Curtis was also part of Brian Lynch's Grammy® Award-winning album Simpatico and Grammy® Award-nominated Madera Latino as well as Christian Scott's Grammy-nominated Rewind That. He also produced the Grammy® Award-nominated Entre Colegas by Andy González. He can be heard on Eddie Palmieri's Sabiduría and Mi Luz Mayor; Gary Burton’s Next Generation; Dave Valentin’s Come Fly With Me; Sean Jones' Im.Pro.Vise, Roots, Kaleidoscope and The Search Within; and Orrin Evans' Faith In Action. As a sideman, Luques Curtis has participated in over 100 recordings.

Louis Fouché Bio
Louis Fouché (Alto Saxophone)
Louis Fouché is a saxophonist, composer and producer who has toured six continents with award-winning artists such as Eddie Palmieri and Christian Scott. Fouché is currently the saxophonist and a music producer on The Late Show with Stephen Colbert with the show’s house band, Jon Batiste & Stay Human. Fouché’s 2012 debut EP, Subjective Mind, was the number-one new jazz album on Amazon. Before pursuing his music career, he earned degrees from MIT in physics and chemical engineering.

Camilo Molina Bio
Camilo Molina (Drums)
Camilo Ernesto Molina Gaetán is an accomplished percussionist from New York City. At the age of two, Molina began studying in the children’s workshop of Los Pleneros de la 21, a community-based group dedicated to folkloric Puerto Rican music. As a student in those workshops, he met his first teachers, Alberto Cepeda and Juan Gutiérrez. Advancing in skill through the years, Molina is now a teacher for Los Pleneros’ community workshops. In 1995, he began his studies at the Harbor Conservatory for the Performing Arts with renowned percussionists Johnny Almendra and Louis Bauzó.

In fall 2000, Molina had the honor of being selected as one of ten semifinalists to compete in the Thelonious Monk Institute of Jazz International Afro-Latin Hand Drum Competition. He went on to become a finalist and was selected as third place winner. At age 10, Molina was the youngest finalist in the 14-year history of the competition. That same year, Molina received a proclamation from the City Council of New York honoring him for his musical talents and achievements. In 2003, he graduated from The Juilliard School’s Music Advancement Program and was chosen later that year for the NYC All-City High School Jazz Band. He is also a recipient of the Celia Cruz Foundation Scholarship (2004) and the Harbor Achievement Award (2001). Molina has recorded on five Grammy® Award-nominated albums and contributed to movies and social media platforms, Emmy®-winning documentaries, Banco Popular’s ¡Sonó, Sonó Tite Curet! tribute and In the Heights.

Molina continues to make a name for himself early in his career, performing with artists of varying musical genres and styles. He is currently on tour as a member of Eddie Palmieri’s orchestra and has toured, recorded or performed with artists including Carlos Santana, Dave Grusin, Ricky Martin, Los Pleneros de la 21, Miguel Zenón, Teatro Pregones, Viento de Agua and the Curtis Brothers.