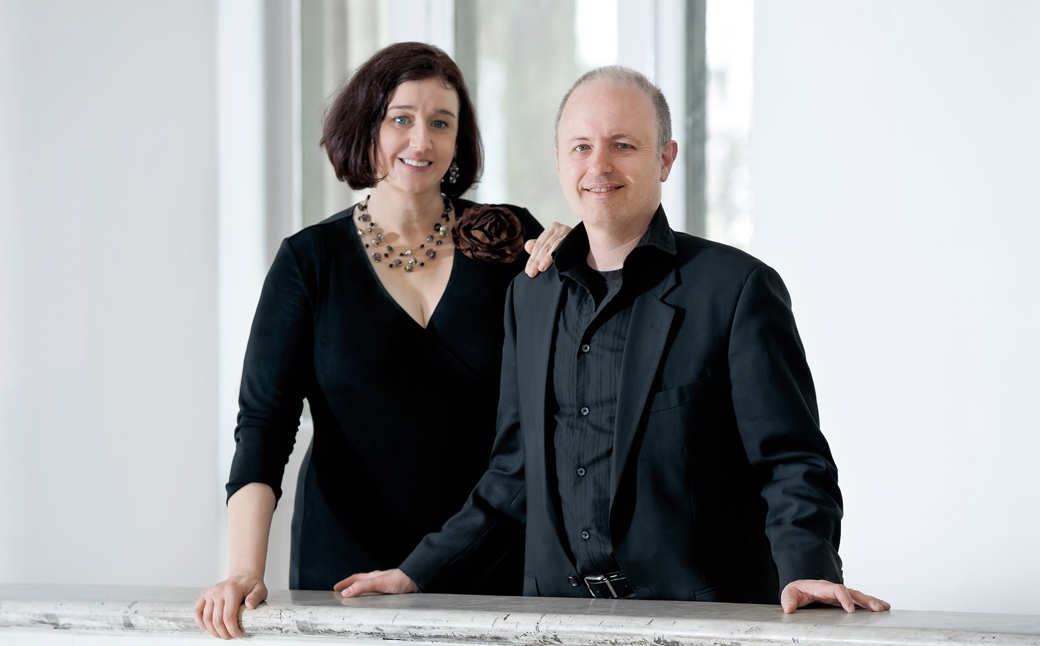 Throughout history, musicians have traveled frequently to study and perform, striving for a successful career. Now, as we are all staying home, Gwyn Roberts and Richard Stone, founding artistic co-directors of Tempesta di Mare, focus on the baroque musicians who defied this trend by remaining local, and nevertheless soaking up and radiating lots of varied stylistic influences. Featuring works by Mancini, Babell, Blavet and more, Roberts, who is also Penn’s Director of Early Music Ensembles, and Stone perform as a duo on recorder, flute and theorbo, exploring works by composers who stayed close to home.

Gwyn Roberts Bio
Gwyn Roberts (Recorder/Flute)
Gwyn Roberts is one of America’s foremost performers on recorder and baroque flute, praised by Gramophone for her “sparkling technique, compelling musicianship, and all-around excellence.” She is also co-founder and co-director of Philadelphia Baroque Orchestra Tempesta di Mare, recently hailed by The Miami Herald as “the model of a top-notch period orchestra.” Now in the 19th season of its Philadelphia Concert Series, Tempesta di Mare tours from Oregon to Prague, recently released its 12th CD on the British label Chandos and reaches audiences in 56 countries around the world with broadcasts of its live performances.

Roberts’ soloist engagements include the Portland Baroque Orchestra, the Chamber Orchestra of Philadelphia, Recitar Cantando of Tokyo, the Washington Bach Consort and the Kennedy Center. In addition to Chandos, she has recorded for Deutsche Grammophon, Dorian, Sony Classics, Vox, PolyGram, PGM and Radio France. Her latest solo recordings include the Fasch Recorder Concerto in F, Bach’s Concerto in G after BWV 530 and Sonatas by Francesco Mancini. She enjoys collaborating with living composers, recently recording James Primosch’s Sacred Songs and Meditations with the 21st Century Consort for Albany Records.

She is an enthusiastic educator, with recent masterclass engagements at the Curtis Institute of Music, the Hartt School of Music and the Oregon Bach Festival. She is Professor of Recorder and Baroque Flute at the Peabody Conservatory, Director of Early Music Ensembles at the University of Pennsylvania and she directs the Virtuoso Recorder Program at the Amherst Early Music Festival. She recently served on the Board of Directors of Early Music America and is on the Historical Flutes Committee of the National Flute Association.

Roberts has played recorder since childhood. After graduating from Bryn Mawr College, she earned a performer’s certificate at Utrecht Conservatory in the Netherlands, where she studied recorder with Marion Verbruggen and Leo Meilink and baroque flute with Marten Root. In the years before and after Holland, she logged nine seasons as a member of Piffaro, The Renaissance Band, traveling around the U.S. and Europe playing historical woodwinds, before founding Tempesta di Mare with her husband, Richard Stone.

Richard Stone Bio
Richard Stone (Theorbo)
Lutenist Richard Stone has performed as soloist, accompanist and conductor worldwide. The New York Times called his playing “beautiful” and “lustrously melancholy,” while The Washington Post described it as having “the energy of a rock solo and the craft of a classical cadenza.” Notable solo engagements have included a two-season nationwide tour of the Bach lute suites and performances of lute concerti in the Czech Republic at the Prague Spring International Music Festival, in Germany at the International Fasch Festival with Philadelphia Baroque Orchestra Tempesta di Mare, in Boston with the Handel & Haydn Society, and in Cleveland with Apollo’s Fire. Commercial recordings include Johann Friedrich Fasch’s lute concerto, the world premiere release of the complete lute concerti of Silvius Leopold Weiss, lute suites by Weiss and new theorbo music by David Loeb. He founded and co-directs the Philadelphia Baroque Orchestra Tempesta di Mare. Stone has conducted from Orlando to Taipei, leading from the theorbo in repertoire from Monteverdi to Handel. He teaches baroque lute and theorbo at the Peabody Conservatory.

Stone graduated with highest honors from SUNY Purchase. He studied lute with Nigel North as a Fulbright Lusk Fellow at the Guildhall School of Music & Drama in London, and with Patrick O’Brien at the Mannes School of Music in New York.